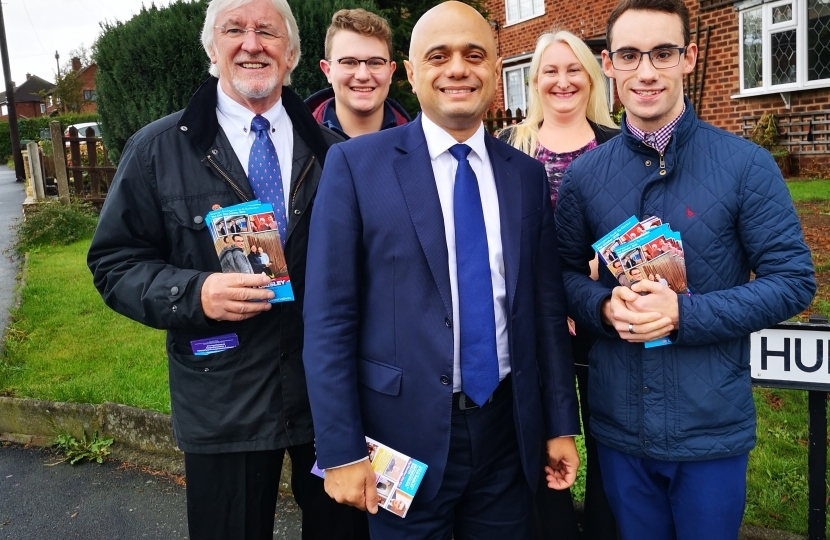 SAJID Javid has praised the success of Conservative candidate Kyle Daisley, in the Bromsgrove South by-election last week, describing it as a “remarkable local victory” that “reflects the national mood” as the country prepares for a general election - writes Ben Russell in the Bromsgrove Advertiser.

Kyle Daisley claimed the vacant Bromsgrove South seat on Worcestershire County Council as Labour lost almost a third of their vote from 2017.

Daisley (769) earned more than twice as many votes as Labour rival Bren Henderson (351), who finished in a distant fourth place in the by-election, held on October 31.

The seat had been vacated by longstanding Labour councillor Chris Bloore, who last month revealed he was leaving the country to move to Canada.

Commenting on the result, Sajid Javid said: “This is a fantastic result for Bromsgrove Conservatives and our brand-new local Councillor Kyle Daisley.

Kyle is a committed, driven and personable champion of our local community - who has already started lobbying me to work together on projects for Bromsgrove South.”

“More broadly, I think this result demonstrates a national sense of frustration with the choices that Jeremy Corbyn and the Labour Party have made over the past few months. During my street surgeries last week, the constituents I spoke to made it clear that they want an end to the confusion, indecision, and arguments we have put up with for three years.”

You can see the full article here: https://www.bromsgroveadvertiser.co.uk/news/18018109.sajid-javid-praises-remarkable-conservative-victory-bromsgrove-south-by-election/?fbclid=IwAR3S2snQNJAb9-OJUkFDl82sl8MVMKmcmvn0GVzyru5St3oPrrBiwKBsGck